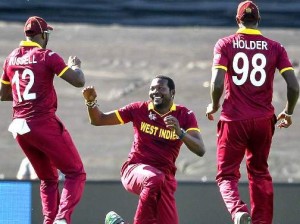 Pakistan played just bad cricket to win the match against West Indies at Christchurch. On the field they dropped as many as five catches to let the Caribbean loose to go past 300. While pursuing they declined to show any application and exhausted at just past the halfway mark. The consequence now pushed the former world champion to the danger zone.

Being put to batting first West Indies were reduced to 2 for 28 as Gayle the danger man exited early but the subsequent batters staged a remarkable comeback with substantial contributions and the late onslaught by Andrew Russel raised the score to 320 for six in the stipulated 50 overs. Russel made 42 of 13 balls.
For West Indies, Ramdin made 51 but importantly he shared two crucial partnerships, a 49-run partnership with bravo and a 42-run one with Simmons. Bravo made 42 and Simmons made 50.

Pakistan began its chase miserably. Nashir Jamshed miscued the second ball of the innings from Tylor and ended in the hand of Russel. Four ball later Taylor removed veteran Younis Khan for a duck. In his second over Taylor claimed his third prey in the shape of Haris Sohail (0). Holder removed Ahmed Sehzad in his very first over .Then captain Misbah Ul Haq tried his best but failed to proceed as he was out in the eleventh over. Pakistan at the end of the eleventh over was reduced to 25 for 5. The match virtually had slipped out of Pakistan’s grip.

Massood and Akmal posted some resistance for 15 overs , and made 80 runs between them before they were separated in the 26th over. Afrid played a cameo but was found insufficient to make a match of it. Eventfully Taylor claimed 3wickets just for 15 and Russell bagged 3 scalps for 33.

Both Pakistan and West Indies took to field carrying humiliations from their respective initial encounters. Pakistan had lost to its arch rival India and West Indies suffered a four wicket defeat in the hand of Ireland. They were in search of points. The win made West Indies open its account in the contest where as Pakistan is still waiting being at the bottom of the point table.
Pakistan won the toss and decided to bowl
Man of the Match: Andre Russell