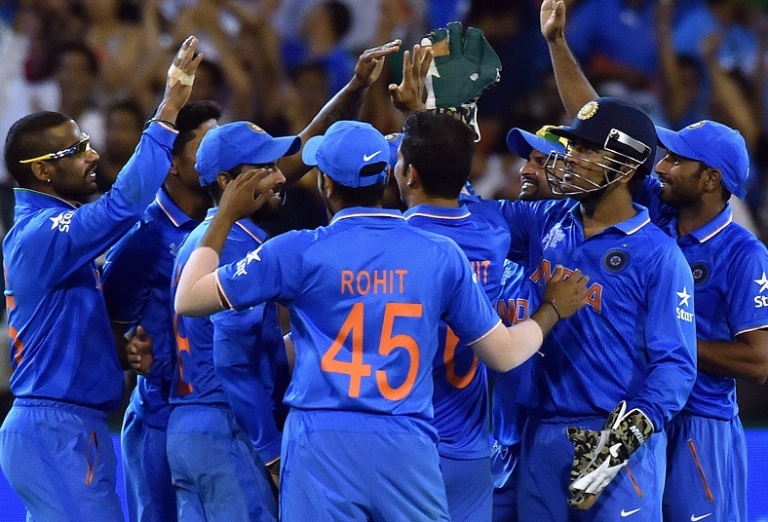 India beat South Africa at the Melbourne Cricket Ground MCG by 130 runs and consolidated its position at the top in the point table of the group B. South Africa has been testified vulnerable in pressure situations and the Melbourne affair was just another such event to reckon.

India posted 307 for the South Africa to chase and maintained the pressure. The protease gave in to it. Mohammed Shami first send back De Cock with an out flying ball in the 4th over of the innings when there were just 12 runs on the board .Six overs later Mohit Sharma trapped the reliable Hasmi Amla with a bouncer.
AB de Villers paired with Duplessis was about to reorganize the inning when a straight throw from Mohit Sharma did him and the match took the real turn.de Villers made 30 of 38 balls. Duplessis occupied the crease for some time but the Indian bowling did not let any easy life there. His 55 of 71 balls finally turned out to be inconsequential in one of biggest defeat of his team in the world cup. Eventually it was India’s first victory over South Africa in the world cup.

Batting first India made 307 at the cost of 7 wickets. Sikhar Dhawan who has shown signs of retrieve in the previous match against Pakistan beautifully compiled his innings for 137 runs of 146 balls. But Ajinkya Rhane with his 79 of 60 balls brought the real acceleration into the innings. Virat is the other significant contributor. He gave 42 runs. Dhoni’s played a small inning but it had the required speed that saw India went past 300.

At Melbourne India had suffered the early exit of Rohit Sahrma before Virat Kohli and Sikhar Dhawan steadied the Indian inning and gradually set launching pad solid for the team. The pair had gathered 127 when Virat pulled Imran Tahir straight to Duplessis . Ajinkya Rahane replaced Virat and executed his responsibility with utmost perfection.
When India was looking ahead for a massive total Dhawan mistimed a bouncer from Parnel only to be ended in Amla’s hand. That followed fall of wickets in quick succession. A cameo of 18 runs from Dhoni took India past 300.