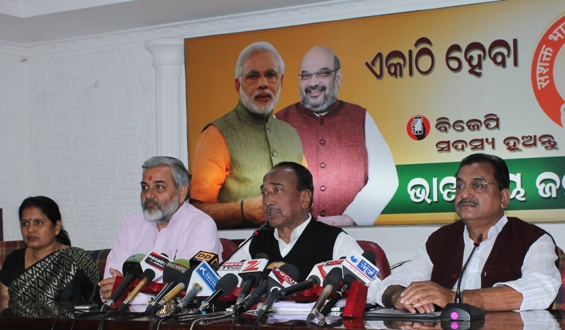 The cabinet decision regarding discretionary quota benefits may be hailed as historic by the ruling BJD but BJP in the opposition has criticized it as confusing, contradictory that would “not stand the scrutiny of law.”

As the senior BJP leader Bijay Mohapatra said the decision was a hoax being designed to mislead the people of Odisha. Sri Mohapatra was presenting his view before the media a day after the cabinet took the decision to cancel all the 1791 plots, flats and land allotted under discretionary quota since 1995.

He said the Chief Minister and his government is silent on the land scam which is the real and big issue far beyond the issue of the discretionary quota allotments. The government took the decision in a haste being compelled by the apprehensions arising in them from BJP’s upcoming activities. The senior leader even challenged if the land issue was at al put for discussion in the cabinet meeting. He said no one in the cabinet actually knew what was there for discussion in the meeting.

He said the Taradutta task force had remarks on the land allotted by the General Administration (GA) but the government is silent on it. He further added that the state government has been criticized by the court for its approach in land allotment exercise. The state government is yet to bring any land policy in the state that the state high court has recommended 12 years back, said Sri Mohapatra “absence of a proper land policy has opened the flood gate for corruption”

See also  Naveen is with Modi in replacing the plan body.

CAG has already made its remark on the land allotment business in the state; the task force has also presented its report after making investigation then “what is another Vigilance probe for?” said the veteran leader.

“Vigilance being under the GA is not a credible agency for investigation” remarked Bijay Mohapatra and reiterated his party’s demand for a CBI investigation into the land scam in the press meet in the party office flanked by party spokes person Samir Mohanty, Sajjan Sharma and state secretary Pravati Parida.