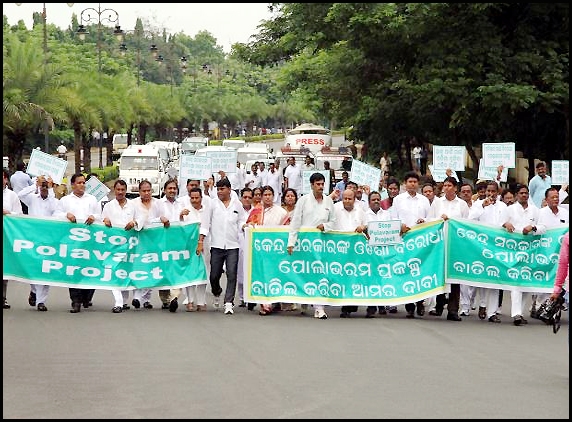 Law makers of the ruling BJD in Odisha including its ministers in the government approached Governor S.C Jamir on the issue of Polavaram on Friday. They submitted a memorandum to the governor for the President of India seeking his intervention in the issue.
The lawmakers have demanded work on Polavaram to be kept on hold until the state’s interests are addressed. Complete stop of works and public hearing in the area was figured in the list of their demands. They also have demanded that environment clearance given to the project to be withdrawn and the national project status awarded to the project to be scrapped as well.

On Friday when t he assembly sat for the day’s business BJD members just burst out with slogans against the Polavaram project and the NDA government in the center leading the house to be adjourned in a minute. From there they marched towards the Governor’s house leaving the opposition in a fix.

The BJD lawmakers made the move just a day after the house committee comprising members from BJD, Congress and BJP had taken a unanimous decision to go to the Prime Minister with a set of demands.

This move of the ruling party has stirred resentment among the opposition parties making the congress members resign from the house committee. Members of BJP too have decided to quit the committee.

OPCC President Prasad Harichandan said that the ruling party staged the show only to snatch the media space that his party was to acquire by conducting a successful protest against the government across the state on the issue of ration card discrimination.

Meeting the governor was a political responsibility of BJD, said its leader Amar Satpath and added that that had nothing to do with the House committee’s programme.