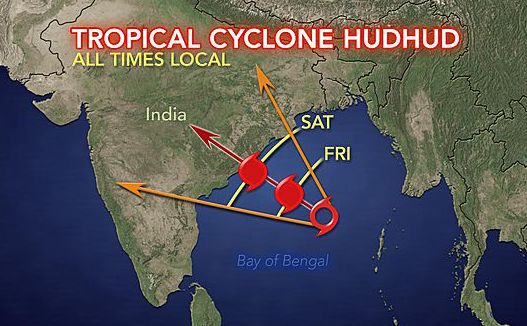 Bhubaneswar: The cyclone storm HudHud in the morning on Wednesday has left Andaman after causing damages there as it is rushing in the West-Northwest direction. The cyclone is feared to hit the coastal land of Andhra and Odisha on October 12 with a severe destructive force that it would gather in the course of next 36 hours.

As per the Indian Meteorological Department (IMD)’s weather alert on late Wednesday evening the “system would continue to move west-northwestwards, intensify further into a severe cyclonic storm during next 24 hours and into a very severe cyclonic storm during subsequent 36 hours.” Before it would enter the land mass between Visakhapatnam of Andhra Pradesh and Gopalpur of Odisha on October12.

However meteorological predictors give Hudhud a gala force of between 130 and 150 Kmph substantially low than that of the Phailin’s 210Kmph of last year.
Khurdha, Puri, Gajapati and Ganjam are the 4 districts in Odisha feared to bear the brunt of the cyclone most while the three districts in Andhra Pradesh to be affected most are Vishakapatnam, Srikakulam and Vizianagaram.

Both the states have braced themselves up to face the storm. Odisha government has sounded high alert in 13 districts. The success of precyclone situation management last year has encouraged Odisha government to go for zero causality achievement in the face of Hudhud.

Odisha Chief Minister Naveen Pattnaik said “All preparations have been made to meet the situation. All concerned departments have been asked to make their contingency plans,” as the state government has cancelled the leaves of its employees and has put the Odisha Disaster Rapid Action Force (ODRAF) on alert to deal with the cyclone.

Last year by virtue of a well organized effort the Odisha Government could check the Phailin to take just 20 lives it is to be noted that the supercyclone of the near same intensity in 1999 had claimed around 15000 lives.