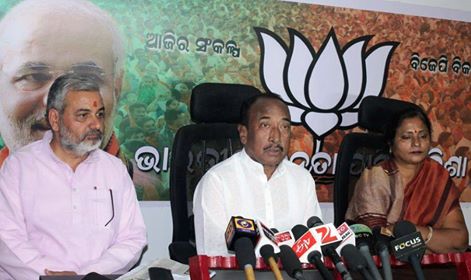 The legislative assembly in Odisha was humiliated for the 11th day in a row. Thanks to the law makers of the state. It was 10.30 in the morning on Tuesday. The house opened but only to be adjourned in the line as it has been there for the last 10 days since 20th of November. Give or take few minutes it is all repetition of a same story, first adjournment of the house in minutes of its opening till a post lunch time and resume in the post lunch so that second one till the next day can be announced. As far as the background is concerned it is full blow with noise of equally contribution from the treasury bench and the opposition.

On Tuesday, the adjournment announcement till 3PM came from the speaker Niranjan Pujari in 15 minutes the house sat for the day and the ultimate announcement for the day came in 38 minutes it re-sat in the afternoon. However, today’s uproar had got a fresh ingredient ‘Bills in Odia language’ though the ‘chit fund’ was all there alive.

To surmise the winter session of the Odisha Legislative Assembly continues to be in a state of paralysis for the last eleven days. And this is a “deliberate” act of the ruling party blames the opposition. “The chief minister has been constantly disrupting the proceedings from the question hour itself” charges senior BJP leader Bijay Mohapatra. On the media platform he said “Fearing further expose of his involvement in the chit fund scam the Chief Minister with the help of the speaker and the Advocate General is trying to stall the voice of democracy in the house” as he added “Sj. Pujari in connivance with Chief Minister and Advocate General Surya Prasad Mishra has created a democratic chaos in the Assembly of the state.

See also  The cabinet decision on the discretionary quota allotment is taken in haste and is out of fear: BJP

Earlier the leader of opposition Narasingh Mihra expressing a similar view and had blamed the ruling BJD for the impasse in the assembly. “The Chief Minister and his party have stifled the democracy” Mishra had said.

Even in the ruling party there is division of opinion on the attitude of the government on the matter of ongoing assembly disruptions. Senior Minister Damodar Rout had raised finger at the Speaker’s role in this situation two days ago. However he did not stand by his earlier statement after a day.He had said on Monday “it appears as if he (the speaker) is unwilling to exercise his constitutional powers to bring order back to the House”