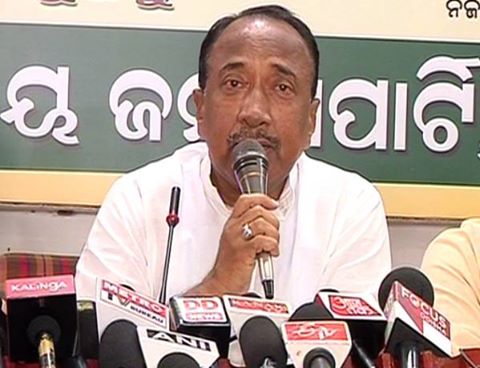 As the Odisha government is out on a hard drive to get its illegally occupied lands back from the BABAs the opposition has appeared with a gun trained at the head of the government. It launched a direct attack on the CM. “The land on which the CM’s house stands is illegally acquired.” Charges BJP. ‘Being the first citizen of the state Naveen Pattnaik must come out with answers to the charges while his government is going after others.”

“Seventy five percent of the land of Navin Niwas belongs to Lingaraj Mahaprabhu.” said BJP senior leader Bijay Mohapatra before the media recently as he dared the CM to show “courage” and “morality” to answer if the land transfer is properly done.
Referring to the AG reports between 2009 and 2015 the veteran BJP leader said around 50 thousand acres of land of Rs 3432.02 crore have been encroached in Odisha. Land worth Rs642.92 crore in the AG department that has been with the CM are in encroaches.

BJD leaders, top officers, companies and influential persons are the main culprits in this act but the government is being found in the role of a silent spectator. Bijay Mohapatra said the AG had remarked there prevailing an unholy nexus and illegal connivance between the government and the encroachers to let this happen.

The government is working since 2009 to release the public property from the encroachers but not a single acre of land is back to its fold yet said Mr Mohapatra to raise question on the government’s intention as he asked“If Santosh Raula, so called Sarathi baba and Sura baba and their sons can be arrested with criminal charges, why Satish Gajviye is moving freely in streets?”

See also  India Japan Comes together to invest in steel sector in Odisha.