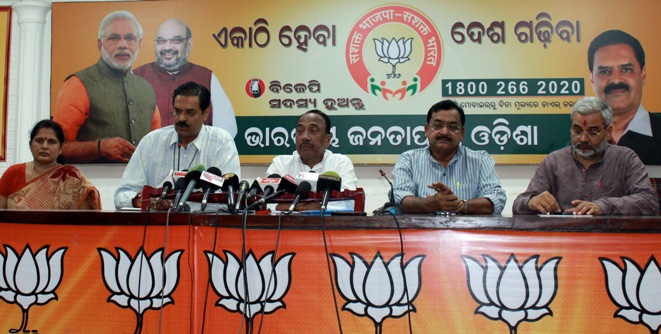 Nabakalebara is not naveen’s cup of tea; BJP seeks help from the center while congress looks up to the Heaven.
For the chaos in the Brahma sthapan, both the opposition parties in Odisha hold Chief Minister Naveen Pattnaik the prime responsible. The”utter mismanagement” with the ghata parivartan rituals on the day of June 15 was just the reflection of

“anarchy” in the state, says the congress, while BJP calls it the consequence of politicization of temple affairs by the BJD.
Political intrusion was obvious there from the beginning in all the affairs of the Nabakaleabar leaving the the age old traditions defied. Said BJP leader Bijay Mohapatra and “what happened with the ghata parivartan had left the Odias hang their ahead in shame.” He added “The Chief Minister should beg forgiveness for the sin he committed.”

“As reparation for the sin of the state government Odisha Congress activists will observe fast and stay awake on June 26.” said PCC president Prasad Harichandan. “May god forgive the government.”

The government should suspend the chief of the Sri Jagannath Temple Administration (SJTA) for its failure to manage the event properly demanded the Odisah unit of BJP. The party rubbished the ongoing enquiry by the SJTA into the matter pointing that the SJTA itself is the culprit. Congress demanded a high level judicial enquiry. At the same time it has asked the CM to resign on the issue.

“Naveen Pattnaik has no right to continue in the office after Brahma Parivartan fiasco” said Narasingha Mishra, leader of opposition in the assembly. The government is managing the event in the most irresponsible way and make it worse the CM is observing silence on the issue, said PCC head in Odisha.
Both the parties raise doubt on the well being of the mega festival of Nabakalebara in the hand of the state government. BJP suggests the state to seek help of their government in center, while the congress is going to seek providential support to see the function go with smoothness.