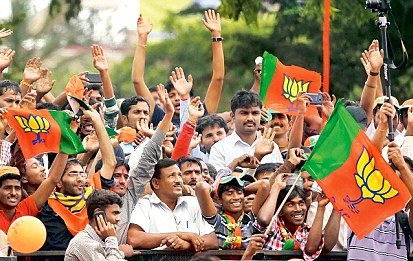 BJP and BJD workers were engaged in face offs on the roads all through the day on Wednesday posting challenges before the police administration.

The BJP workers landed on the road on Wednesday to demonstrate its anger on the Mayor issue just a day after it had staged a state wide wheel –jam . Just after the completion of the chakka jam move on Monday BJP’s Bhubaneswar unit made the announcement of Bhubaneswar bandh and that was followed by a massive demonstration in front of the state police headquqrters.

The hyperactive response of BJP in the mayor issue has presented this as a subject for political interpretation. Is it to clear the confusion gathering on the role of the party or is it to show its strength for share in case a partnership deal cracks?

The recent political developments unfolding can be picked for analysis.

On November 24 Amit Saha, whips up his cadres in Odisha against Naveen government, He inspires them to uproot the Naveen regime. This is something makes BJP’s political approach in Odisha definite-no compromise with BJD. But in a week time comes shower of appreciation for Naveen Pattnaik from party stalwarts like Arun Jaitely and Rajnath Singh. Leaving the cadre confused or leaving them to confront a media projected perception of confusion.

The party on 8th Dec. convened a workshop for the party leaders in the Bhubaneswar office to get the doubts clear. And the mayor issue provided a specimen to do the practical.

Since the break up with BJD in 2009 in Odisha BJP seems to struggle to maintain a clear line of action with BJD in the post split scenario. The state unit’s line of approach for the relationship with BJD has not been conformed to that of the central leadership’s. It has been hot and cold.

The central leadership did not have confidence to unleash its Odisha Unit to go for a head on fight with BJD. This was reflected in Amit Saha’s address in 2014. He had calculated aggression for BJD then but it was perceptibly hard this year. Hard enough to animate its workers.

The Odisha unit claims to have expanded its force size to 30lakh from the previously 3lakh. More importantly it got a non-reluctant leader to take on Naveen. But the dampener came from the top prompting the state unit has to respond.

It is to be noted in political context that the day Odisha BJP observed chakka-jam on Monday Dharmendra Pradhan was in Odisha, and on that very day it amplified it aggression by declaring Bhubaneswar Bandh for Wednesday.

Mr Pradhan had raised question on CM’s silence on the issue. He said,” Is the CM silent because the person in question is a big man in Bjd?” He was very critical too on Naveen Patnaik’s support for the demonitisation exercise of the Modi government that at present has stirred the country. His brigade in Odisha traces ambiguity in it.