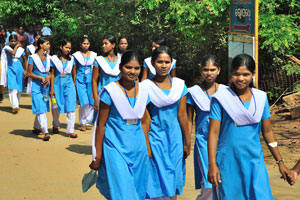 Block grant teachers in Odisha called off their ongoing agitation after their representatives had met Chief Minister Naveen Pattnaik in Bhubaneswar on Sunday. With the decision academic activities in 2209 block grant schools in the state is hoped to go on normally. These Schools have been locked up since August 8 when the teachers took to street on remuneration demands.

Block grant teachers will back to schools and resume work from Monday, said Prasant Kumar Mohapatra, General Secretary of Block Grant High School Teacher and Employees Association after meeting CM Naveen Pattnaik as he expressed satisfaction over the meeting. He said,”Government has assured to full fill their demand in 2016-17 finance year so the strike has been called of till then.”
Being not convinced with the outcome of the inter ministerial level meeting on 24 Sept the Block Grant High School and teachers Association went for intensifying their ongoing strike though its partner union in the agitation Odisha Vidyalaya Sikshyak Mahasangh retreated after the meeting. The Block grant teachers had planned to stage a foot march in the CM’s constituency Hinjli on Monday and a massive demonstration with students and their parents in Bhubaneswar on October 2.

State government on 25 Sept had issued a notification for providing 40 percent Block grant to 438 schools. And the Mass Education Minister Devi Miashra appealed the teachers to back to duty for the sake of students’ future but the block grant teachers were just reluctant to budge on their demand.

The block grant teachers have been demanding a uniform salary and other job facilities in matching with their government counter parts for years. But the government citing fund deficit is expressing its inability to meet their demand fully.