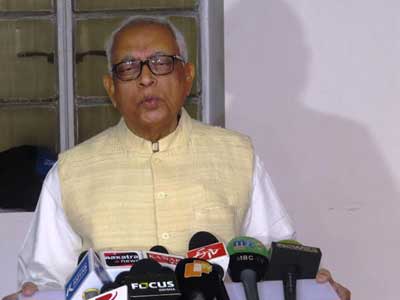 Congress party in Odisha has posted a demand for president’s rule in the state to mark its aggression intensified against the Naveen government on the chit fund issue. The party charges there is constitutional breakdown in Odisha making it a fitting condition for the CM to resign.

Congress legislators led by their leader in the house Narsingh Mishra on Saturday marched towards the Raj Bhawan, met Governor S.C Jamir there and registered their demand seeking president’s rule in the state under article 356. The party has also sought resignation of the CM and dismissal of MM Das commission in its two other demands posted before the Governor.

We have asked the Governor to invoke section 356 of the constitution and recommend president’s rule in the state in case the CM doesn’t resign, said Narsingh Mishra after the meeting as he added that parliament practice cannot go on there where the ruling party has decided not to allow the leader of opposition to have his say in the house. The ruling party unprecedentedly has paralysed the assembly proceedings for the two full days. The CM is ignoring opposition’s demand to make statement on the chit fund issue. Mr Mishra said these situation warrants president’s rule in the state.

Meanwhile the assembly has been adjourned till Tuesday 10.30 AM following an inconclusive all party meeting to break the logjam in the assembly.