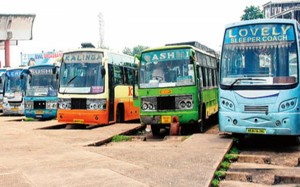 The Odisha government on Thursday let the fares of bus services stand on an automatic mechanism for fixation after, for the last time it increased the bus fare with the recommendation of the technical committee.

With the new fare effective from Thursday midnight buses will charge more by four to eight paisa a Km according to their categories. An AC deluxe service providing bus will now claim Rs 1.07 per Km against the currently 99 paisa. Similarly deluxe bus service has become costlier by 6 paisa Km as the fare increased from 80 paisa Km to 86 paisa a Km. Ordinary and express buses will take 4paisa more a Km for their service as fare of the ordinary bus service increased from 57 paisa to 61 paisa and that of a express service it is a hike from 60 to 64 paisa.
Commerce and Transport minister Ramesh Majhi made the announcement after his meeting with the bus owner’s body a day before the day bus owners had threatened to stop the service on the demand of fare hike.

However the all important announcement from the minister was the automisation of the bus fare revision process through a formula purely based on the diesel price. As per the new formula bus fare of ordinary and express buses would automatically go up by one paisa a Km in case diesel registers a hike in Rs2. The fare hike would be 2 paisa for Deluxe and AC deluxe buses. In the case of a fall of diesel price by 2 rupees there would be a bus fare reduction by one paisa for ordinary and express buses and two paisa a km for deluxe and AC deluxe buses. The revised fare will come to effect within 2 days of the price escalation.

See also  As the first, Odisha extends lock-down till April 30,

After the diesel price became a subject of fortnightly revision the bus fare failed to concur with it triggering public resentment .there prevailed a perception that the commuters were denied the benefit of reduction of fuel price when availing bus services. In the five downward revisions the bus fare had climbed down to 4paisa a km whereas with a single upward jump the bus fare recovered 4 to paisa.