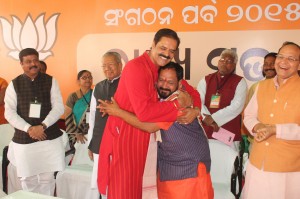 Basant Kumar Panda was elected President of the Odisha unit of Bharatiya Janata Party on Thursday. He rode to the post with a unanimous support, at least the party managed to project it so. In fact there were multiple names in the party doing rounds as aspirants for the top post giving rise to speculations of a contest on the day. But Mr. Panda the Nuapada MLA filed nomination as the lone candidate only to be elected unopposed.

Senior leader Bishwabhusan Harichandan, Outgoing President K.V. Singdeo, Union Minister Dharmendra Pradhan and former Party President Suresh Pujhari were present there on the dais in a post election felicitation programme for the new President in the party office as a demonstration of unity.

Significantly Pratap Sarangi whose name was leading the talking points on list of contenders for the post shared the dais. He said that BJP is the only party in the country that honors democratic values, any one with talent can be its president which cannot even be imagined in other parties in the country. He welcomed the new president and promised to be with him though he did not conceal that his name was being discussed in the media for the post.

Arun Singh in-charge of Odisha, Central observer Saroj Pandey, and senior leader Saidan Singh were present on the stage.
K.V Singhdeo said that he would give his best to stand by the leadership of Basant Panda, all the leaders through their speech reiterated assurances on similar tone.

Union Minister Dharmendra Pradhan expressed his content that the final result came through a unanimous affair. He is being perceived as the craftsman to lead the event for this outcome.