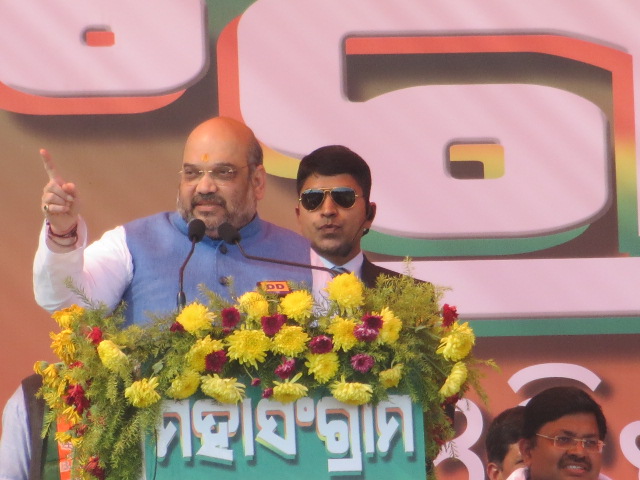 The state BJP unit may be desperate to cross sword with their friend turned foe BJD, but the think tank at the top has its own plan. It still prefers to stay shy of any confrontational mode of political operation in the state at least for now. At present they resort to development as the plank to take on the ruling BJD.

“We will put Odisha in the race for number one.” said Amit Shah, the BJP president in a rally in Bhubaneswar on tuesday. Sri Shaha is in Odisha on his maiden trip to rev up the party’s organizational strength in the state. He said that his party would work to see the eastern part of India in par with the western part In terms of development.

“Odisha is bestowed with vast reserves of natural resources that can make the state stand at the top of development. But it is found to be placed among the poorest in the country. “He holds the state government responsible for the status as he described that there are only 14 percent of people in Odisha who have access to pure drinking water. Only22 percent in the state can use toilet.46 percent of the people are below poverty line in the state. The state government can’t provide teacher in the schools, doctors in the hospitals.

BY Virtue of the Modi government’s new formula for coal business the state exchequer will earn 1600 cr in royalty alone besides it will also take in the entire amount generated out of the coal block auction, said shah.

During his 45 minutes of address before a gathering of 50 thousand, Amit Shah counted the schemes like Jan dhan yojana, Adarsh gram yojana as the instruments of development for the poor by the BJP led NDA government. He said that Narendra Modi has come of a poor family and faced all the hardships to understand poverty.