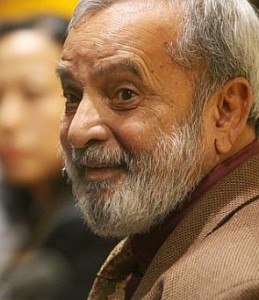 Jnanpith award winner U R Ananthamurthy, who strode the Kannada literary world like a colossus with his pathbreaking works, died of multiple health complications at a private hospital in Bangalore on Friday.

Ananthamurthy, rated as one of the best writers in the country who won acclaims from critics and fans alike, breathed his last this evening, 10 days after he was hospitalised with fever and infection, the doctor attending on him said.

Eighty-two-year old Ananthamurthy is survived by his wife Esther, a son and a daughter.

“He had a cardiac arrest. We tried to resuscitate but it was not successful. So we with great regret announce that he is no more with us”, Manipal Hospital Medical Director & Chairman — Medical Advisory Board H Sudarshan Ballal told reporters here.

Ananthamurthy, who had been suffering from kidney related disease for some years and undergoing dialysis treatment with diabetes and heart problem, turned critical last night, he said.

“His condition got critical since last night and blood pressure also deteriorated. He was also facing breathing problem, so we had kept him under ventilator..,” Ballal said.

Ananthamurthy’s wife and children were by his side when the end came, hospital sources said. In his several decades of literary life, he has won the Padma Bhushan in 1998, Jnanpith award in 1994 and the state Rajyothsava award in 1984.

His nomination for the 2013 Man Booker International Prize brought him to the attention of a Western audience. He was also the vice-chancellor of MahatmaGandhiUniversity in Kerala during the late 1980s.

© Copyright 2014 PTI. All rights reserved. Republication or redistribution of PTI content, including by framing or similar means, is expressly prohibited without the prior written consent.