Unemployment in the urban India rates at 9.3 percent between January and March 2019. It happened to be 9.9 percent during the October-December period of 2018.

As per the report, the urban unemployment rate in the March quarter was lowest among the quarters since April-June 2018. The Unemployment rate among the young workforce between the age of 15-29 stood at 22.5 per hundred. Urban male joblessness in this group was 20.9 percent. For the female, it was 29.0 percent. Joblessness in this bracket of the workforce was 23.7percent.  Not getting at least one hour of work in a week qualifies one as unemployed as per the CWS assessment. 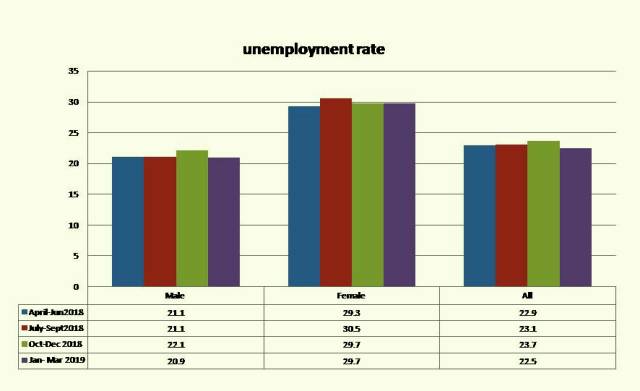 The drop in the unemployment rate was because there was a marginal increase in the employment segment of salaried employees and self-employed workers.

The Labour force refers to the part of the population which supplies or offers to supply labour for pursuing economic activities for the production of goods and services and, therefore, includes both ‘employed’ and ‘unemployed’ persons. Labor-force participation rate (LFPR) is defined as the percentage of the population in the labor-force. Labour-force according to current weekly status (CWS) is the number of persons either employed or unemployed on an average in a week of 7 days preceding the date of the survey.