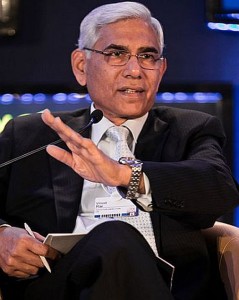 In fresh embarrassment to the erstwhile United Progressive Alliance regime, particularly to former Prime Minister Manmohan Singh, former Comptroller Auditor General Vinod Rai has claimed that coalition functionaries had deputed politicians to get him leave out names from the audit reports in the Coalgate and Commonwealth Games scams.

In remarks damning the previous dispensation, he has also claimed that UPA functionaries had roped in even his colleagues in the Indian Administrative Service, to which he belonged before his appointment as CAG, to persuade him to leave out names.

Like some of the books that have recently hit the stands including those by the media adviser of the former prime minister Sanjay Baru, former erxternal affairs minister K Natwar Singh and former coal secretary P C Parakh that have been severe on Singh and his government, Rai is penning his views in his forthcoming book Not Just An Accountant to be released in October, that will be critical of the UPA regime.

Rai, who had demitted office last year after several run-ins with the UPA government and had estimated a “notional” loss of Rs. 1.76 lakh crore in the 2G spectrum allocation and Rs.1.86 lakh crore in coal block allocations, was severe in his comments to Times of India on Singh.

He has said he would provide details of how sheer considerations of survival led Singh to acquiesce to decisions which caused huge loss to the exchequer. “See the prime minister is the first among equals. He has to take the last call which sometimes he did, sometimes he didn’t. Everything cannot be sacrificed only to remain in power. Governance cannot be sacrificed at the altar of compulsion of coalition politics. I have said it in the book,” he said.

See also  Maharashtra election: BJP SAYS IT IS READY TO DISCUSS WITH SHIV-SENA ON ALL ISSUES BUT NOT ON CHIEFMINISTER POST.