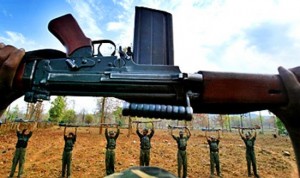 It must be understood that armed win can’t be a guarantee of win the war against the Maoists if the development concerns are not addressed.

For the security force engaged in a prolonged and hectic war against the ultra leftist, apprehension of Sabyasachi Panda certainly is a huge achievement. In Odisha it may turn out to be a decisive blow on the mao insurgencies. But for a most unlikely happening Sabyasachi can no more be seen physically performing in the red corridor. Sabyasachi Panda once happened to have adorned top posts in the organization like the secretary of the CPI (Maoist) in its Odisha unit may have lost his command in the there  in the last 3-4 yrs yet he is a priced catch for the police is  for sure. So the result of this achievement, to the most optimistic limit, can be a lowered Maoist violence in the state for some time. The ongoing Mao sahid week has marked no big event yet may be taken for the result of the July 18, arrest of Panda.  But beyond that it is not at all bright. The land is still as much fertile to produce maoist as it was in the 1970s.poverty, negligence, alienation and deprivation manures the land for this cause.

Except the coastal belt 18 districts of Odisha are affected by the Maoist menace, the western and the south western districts being the worst affected. This region is chronic poverty stricken and tribal and Dalits being the dominant inhabitants in this region. In social indicators they are stooped far below the national standard. Starved death, child trade and migration for work have been the feature of the economic condition of this region. Most of the districts in the region’s gross district domestic product bear under or near 1 PC share in the gross state domestic product. Though Odisha has registered a significant decline in poverty of around 20 percent in the last 10 yrs the Mao infested area are still languishing at high rate of poverty.  Nearly 70 percent of the tribal and dalits in Odisha are landless and majority of them eke out their living from agricultural labor. Thus they are the soft subjects of exploitation. Providence of health and educational service in the region is pathetic. Thus all combined make an ideal condition for germination and thrive of Maoist elements to retaliate the system.

To bring up an egalitarian society the Maoists believe in armed revolution. So the fight against the movement will be of two forked. One is with arm and the other one is with development. It must be understood that armed win can’t be a guarantee of win the war against the Maoists if the development concerns are not addressed.