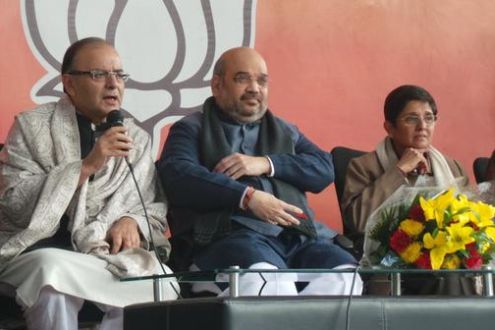 As the political atmosphere brews up in Delhi for the Feb 7 electoral battles, Bharatiya Janata Party (BJP) inducted former IPS officer Kiran Bedi in its army.” She will play an important role in the poll campaign.”

The former lady cop though had an open political bend towards BJP formally joined the party on Thursday in Delhi in the presence of Party President Amit Shah. Union Minister Arun Jitely and Harsha Vardhan were also present on the occasion. Speculation is rife that she will be pitted against Arvind Kejriwal in the New Delhi constituency. However any official confirmation in this regard has not come yet.

Whether Bedi will be in a direct fight against Kejriwal or not is a tactical secret but it is open that she has been picked up by the BJP as its answer to Arvind’s credentials of Anna Crusade. Kiran Bedi was an integral member of the Anna team in the movement as Arvind was.

The party is circumspective on the subject of projecting Kiran Bedi as the CM candidate but it is “excited to start poll campaign now” said Amit Shah after Kiran Bedi joined BJP. “She will play an important role in the poll campaign.”
BJP is looking forward to carry on its winning spree that had started with the general election in the previous summer, to Delhi where AAP stands as the main contestant. In spite of all the Hara-kiri during the 49-day Kejriwal government, AAP still is the formidable challenge in the capital state for BJP. The party has quite a many organizational shortcomings there that made Shah looking for a face with credibility.

“Not just Delhi, the whole country is familiar with Kiran Bedi. She has an image of credibility: Arun Jaitley “she will make the party stronger”. Amit Shah said,”She comes with a clean image and the party is excited to start the poll campaign now. She follows certain values, for which the party also respects her,”
Arvind Kejriwal has welcomed Kiran Bedi for stepping into politics at the same time made a remark that Kiran’s inclusion won’t save the sinking ship of BJP in Delhi.