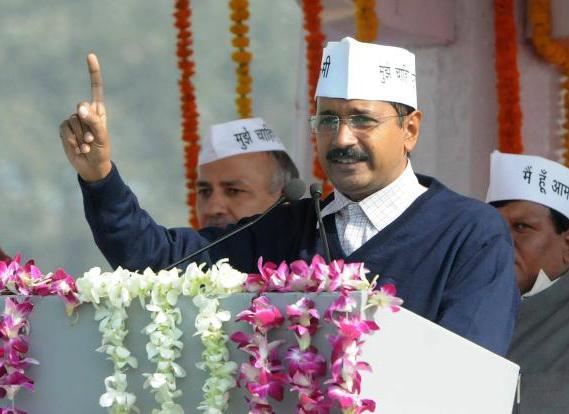 Arvind Kejriwal on Friday took oath as the Chief Minister of Delhi for the second time after his party registered majestic support in the assembly poll on 7th of this month. Thus he became the 8th CM of the capital state.

After the swearing in that was witnessed by tens of thousands of AAP supporters in the Ramlila Maidan the Delhi CM said that his government would make Delhi free of corruption in five years. Jan lokpal and full statehood status for Delhi are among the hosts of priorities of his government, those he figured.
For the coming five years his party will focus on Delhi, said Arvind kejriwal to put stop on the speculations of his party’s electoral ramifications. AAP’s political ambitions outside Delhi had cost it heavily in the general election last year. Particularly the way his party quit the Delhi government and its subsequent advancement in the national stage. He however had managed to regain his base during this election by seeking apology by admitting that step as mistake.

“Last year, we had 28 seats, but maybe somewhere we also became arrogant and decided to fight the Lok Sabha elections. We should learn from it now. The people of Delhi have trusted me. I will live in Delhi for five years and try to fulfill my responsibility with all my might.”

H e said his government would work hard “to pass the Jan Lokpal Bill as soon as possible” but was circumspective to give any time line for it. Kejriwal had resigned last year as the CM of Delhi on February 14 on the Jan Lokpal issue. This time they would do everything with conviction. In the 70-seat Delhi house AAP has occupied 67 seats.

See also  Conservation and efficiency is the way forward: Dharmendra