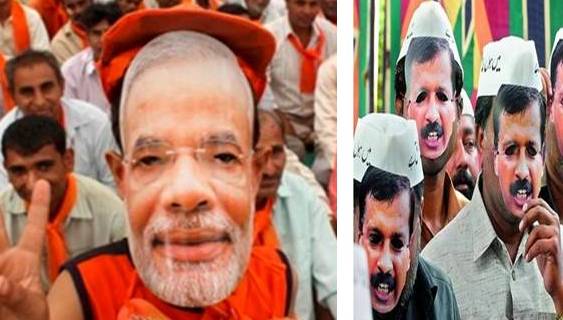 Assembly elections in Delhi will be held on February 7 and the counting will be done on February 10. Chief Election Commissioner VS Sampath on Monday has announced the election schedule for the 70- member Delhi legislative assembly that is to be constituted by February 15 before the ongoing president’s rule ends. Code of conduct will come to effect immediately notification for the poll will be announced on 14h January.

There are 1.3 crore voters in Delhi to exercise their voting right in 11,763 booths.EVM will be used or voting with their being the Non Of The Above( NOTA) option available.
Delhi at present has been under the president’s rule since February 17, 2014 after Arvind Kejriwal resigned. Kejriwal’s government had enjoyed just a 49 -days stint replete with stories and drama.

Delhi has witnessed an interesting electoral battle in December 2013 that resulted the fall of 15 years rule of Sheila Dixit and congress in Delhi. With 31 seats in the assembly Bharatiya Janata Party (BJP) though emerged as the single largest party, Aam Admi Party (AAP) was the real scene stealer. The party in its debut electoral fray has claimed 28 seats and established itself as a vital political player on the turf. Subsequently it partnered with Congress and rode to power but could last only 49 days.

This election, as political pundits’ asses, will mainly be a contest between BJP and AAP with Congress having no real chance. After the spectacular performance in the general elections and the subsequent victories in the state polls BJP is upbeat for the race. While AAP though have failed to impress in the general election is showing confident to give a fight on its home turf.