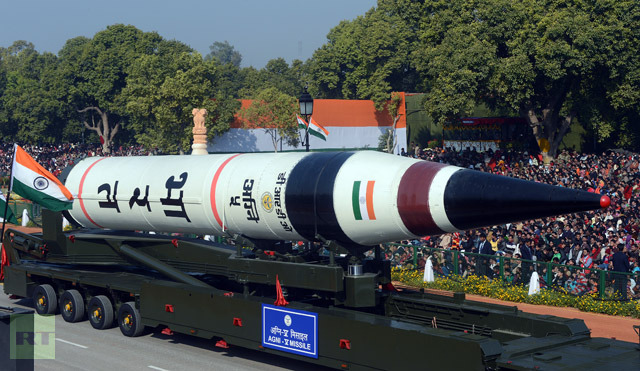 India on Saturday successfully test fired AGNI-5 from the Wheeler Island in Balasore. The indigenously developed surface to surface ballistic missile can carry warhead of 1 ton and hit a target at more than 5000 kilometer.

“Missile was test-fired from a mobile launcher from the launch complex-4 of the Integrated Test Range (ITR) at about 8.06 hours,” said the ITR Director MVKV Prasad confirming the success he added “The missile, witnessed a flawless ‘auto launch’ and detailed results will be known after all data retrieved from different radars and network systems.” This was a canister launch of Agni conducted first time from the Wheeler’s Island.
“The high speed onboard computer and fault tolerant software along with robust and reliable bus guided the missile flawlessly,” the 17 meter long and 2 meter wide and 50 ton Agni-5 is the most advanced model in the Agni series having sophisticated technology for navigation and guidance, warhead and engine.

See also  India again takes down Pakistan in the second reply on the UNGA floor.