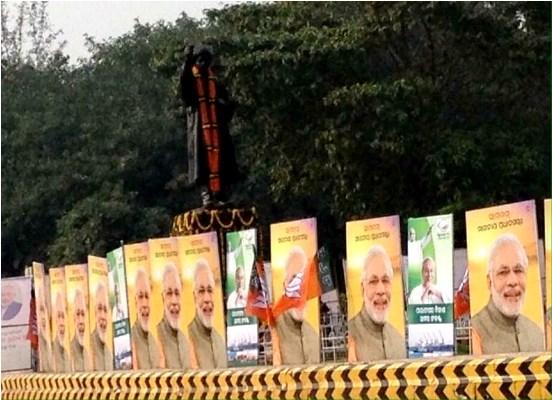 Political climate in Odisha is picking up to charged state through the run up to event of IOCL refinery inauguration on February 7. A sort of activation on the political surface can’t be ruled out when such an event takes place. But it seems a bit too much above the limit that we are used to.

The way political workers are preparing to be out on the day, the poster show offs by both BJP and BJD extends well beyond the political competition that Union Minister Dharmendra Pradhan the central character in the episode terms it to be. It is reaching to the verge of a confrontation.

So the fact is that people of Odisha find, in the political arena BJP taking on BJD the giant. There is no rule to deny any fight on the ground of weight gap.

BJP has never been a cognisable force on the coastal front of Odisha though the political quotient of this region has ever been a perennial source of inspiration for the aCongress forces. And now BJD is the biggest stakeholder of the political space in the marine Odisha while Congress is struggling to hold its stake there. In this political scenario BJP, being backed by the Modi-force is emerging as a player there with claims to be reckoned with. With 23 percent vote base in Odisha BJP feels the guts in it to go for a dare. Besides in the look-east scheme of BJP Odisha is comparatively a good space where it can envisage some hope to make political investment. The current IOCL show off is its reflection.

There are big shouts from the BJD too in the state. BJD the gigantic force in Odisha owns a vote size of more than one crore i.e 43 percent of the entire vote base and occupies 117 seats in the state assembly of 147 seats. It is in power for the last 16 years virtually unchallenged. Yet it is being found engaged with BJP in a contest for credit. The party is going all-out to grab the credit for the IOCL project in Odisha. Naveen Pattnaik’s party is feeling the heat of challenge. Towards a challenge BJD’s approach has always been like this. The BJD leadership always becomes a bit over reactive whenever it reckons a challenge or upset ahead.

The ongoing contest between BJD and BJP may not qualify a standard propriety but one thing in spite of all is positive that there is challenge to political monopoly of BJD. It is good for democracy.