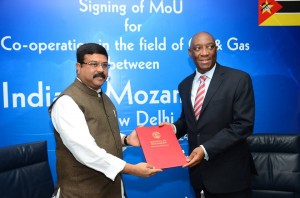 India and Mozambique set to enhance bilateral cooperation on the basis of equality and mutual benefit. Both the countries signed an MOU on cooperation in the field of oil and gas to boost the objective.

MOS (I/C) For Petroleum and Natural gas Shri Dnarmendra Pradhan who signed the MOU for India said “Indian public sector companies have participating interest in Mozambique’s Gas fields” as he sought cooperation from the Government of Mozambique in this regard.

The MOU came up during a bilateral meeting between Shri Pradhan and H.E. Mr. Oldemiro Julio Marques Baloi, Minister of Foreign Affairs in New Delhi on Friday.The two sides discussed various areas of mutual cooperation in the energy sector.

See also  On the right to Kotia Dharmendra Pradhan said it belongs to Odisha and warned befitting reply to Andhra Pradesh’s evil design.