Union Minister for Finance and Corporate Affairs, Shri Arun Jaitley tabled the Economic Survey 2017-18 on Monday, the opening day of the budget session of the parliament, that claims the real GDP growth to reach 6.75 in the present fiscal and will go up to 7.0 to 7.5 in 2016-19.

A series of reforms under taken over the past year will allow this happen,states the report as it added the reform measures undertaken in 2017-18 can be strengthened further in 2018-19.

The survey underlines that due to the launch of transformational Goods and Services Tax (GST) reform on July 1, 2017, resolution of the long-festering Twin Balance Sheet (TBS) problem by sending the major stressed companies for resolution under the new Indian Bankruptcy Code, implementing a major recapitalization package to strengthen the public sector banks, further liberalization of FDI and the export uplift from the global recovery, the economy began to accelerate in the second half of the year and can clock 6.75 percent growth this year. 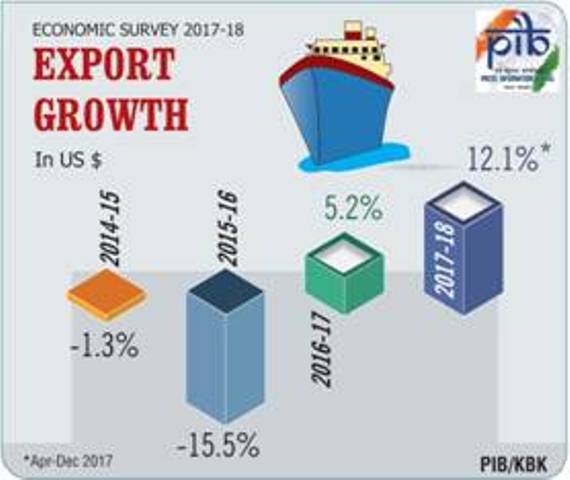 The survey adds that after remaining in negative territory for a couple of years, growth of exports rebounded into positive one during 2016-17 and expected to grow faster in 2017-18. However, due to higher expected increase in imports, net exports of goods and services are slated to decline in 2017-18. Similarly, despite the robust economic growth, the savings and investment as a ratio of GDP generally declined. The major reduction in investment rate occurred in 2013-14, although it declined in 2015-16 too. Within this the share of household sector declined, while that of private corporate sector increased.

The survey points out that India can be rated as among the best performing economies in the world as the average growth during last three years is around 4 percentage points higher than global growth and nearly 3 percentage points higher than that of Emerging Market and Developing Economies. It points out that the GDP growth has averaged 7.3 per cent for the period from 2014-15 to 2017-18, which is the highest among the major economies of the world. That this growth has been achieved in a milieu of lower inflation, improved current account balance and notable reduction in the fiscal deficit to GDP ratio makes it all the more creditable.

Though concerns have been expressed about growing protectionist tendencies in some countries but it remains to be seen as to how the situation unfolds. Some of the factors could have dampening effect on GDP growth in the coming year viz. the possibility of an increase in crude oil prices in the international market. However, with world growth likely to witness moderate improvement in 2018, expectation of greater stability in GST, likely recovery in investment levels, and ongoing structural reforms, among others, should be supporting higher growth. On balance, country’s economic performance should witness an improvement in 2018-19.

The survey highlights that against the emerging macroeconomic concerns, policy vigilance will be necessary in the coming year, especially if high international oil prices persist or elevated stock prices correct sharply, provoking a “sudden stall” in capital flows. The agenda for the next year consequently remains full: stabilizing the GST, completing the TBS actions, privatizing Air India, and staving off threats to macro-economic stability. The TBS actions, noteworthy for cracking the long-standing “exit” problem, need complementary reforms to shrink unviable banks and allow greater private sector participation. The GST Council offers a model “technology” of cooperative federalism to apply to many other policy reforms. Over the medium term, three areas of policy focus stand out: Employment: finding good jobs for the young and burgeoning workforce, especially for women. Education: creating an educated and healthy labor force. Agriculture: raising farm productivity while strengthening agricultural resilience. Above all, India must continue improving the climate for rapid economic growth on the strength of the only two truly sustainable engines—private investment a