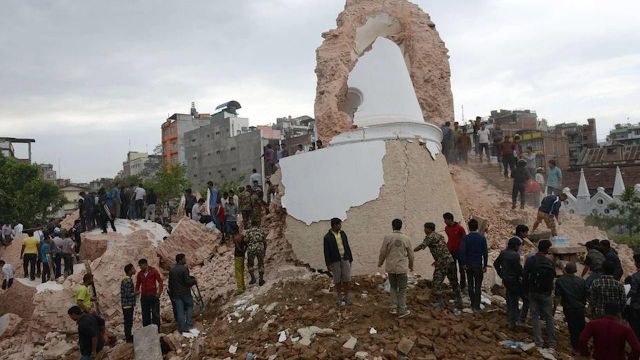 Death toll in Nepal following the Saturday’s earth quake is reported to have crossed 3200 by Monday and is still mounting with the passing of time. Reports of injuries are also flooding in to add up to the current count of 6000 numbers of injuries.
Meanwhile on Sunday at 12.45AM the region felt a fresh tremor that triggered panic among the people who were struggling to recuperate with the devastating experience they had a day before. Having its epicenter located at 16 Km south of Kodari in Nepal the quake was of the Magnitude of 6.5, a significantly powerful one. A fresh avalanche too followed the designated aftershock tremor to pose a massive challenge to the ongoing rescue operation.
Thousands of people in Kathmandu are reeling under the open sky carrying their loads of fear and apprehension and are writhing in the face of acute shortage of food, water and sanitation.
India has engaged itself in a very direct means of rescue and relief work in the quake devastated region of Nepal. In minutes of the seismic plunder in Nepal India was found to be standing by its side with a helping hand. “I assure my brothers and sisters of Nepal that India will stand by their side to overcome this tragedy.” said Narendra Modi, the prime Minister of India.
On April 25 at 11.56 AM the Himalayan base experienced a quake measuring 7.9 in the ritcher scale. The epicenter of the seismic disturbance being at 34 km east south-east of Lamjung, Nepal the Himalayan Kingdom bore the Maximum Burnt of the seismic rage leaving thousands of people dead and injured besides reducing numbers buildings and Infrastructures to rubbles. An extensive part of India adjacent to Nepal and beyond – Delhi, UP, Bihar, Uttar Pradesh, Assam, West Bengal, Sikkim, Uttarakhand, Odisha, Andhra Pradesh, Karnataka, Gujarat and in the Indian capital region around New Delhi too felt the tremor and witnessed causalities.
The architectural monument Dharahara tower totally gave in to the nature’s blow as the Kathmandu the listed UNESCO heritage site found its architectural treasures completely destroyed. The famous Kastamandap is damaged by the earthquake. Several other temples including the Dusavatar temple, Krishna Mandir, Basantdurbar are also damaged.