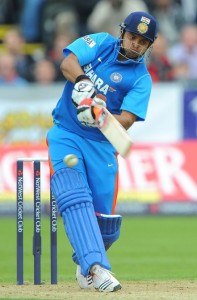 India won the 2nd one- dayer. It was a thrashing win against England at Cadiff on the Wednesday evening. The format changed, the color changed and the man in blue looked different. Suresh Raina made a belligerent 100 of 75 balls hitting 3 over the rope and 12 across the rope as India posted 304 on the board to dare the host. However the rain curtailed the innings to 47 over with the run was adjusted at 295 for Cook’s force to chase but they exhausted at 162 against strong resistance from Dhoni’s. Ravindra jadeja relished with 4 English scalps. In fact the Indian pacers made early break through to expose the weak spots of the opposition for Jadeja and Aswin to hit. The rain delayed English innings registered fifty opening partnership of Alaister Cook with Alex Hales but after the Captain fell to Shami the rest 9 wickets could score only 107 runs and the team was bowled out for 168.
Yet for India it was not a good start in the morning. It was like an extension of the test shows, dancing to the tune of Anderson’s music. Though the lady luck smiled at the openers on one or two occasions the pair survived just for eight overs as Sikhar edged Chrish Woaks to be caught behind. Virat Kohli perished for a duck after four balls. Ajinkya Rahane joined Rohit and the duo repaired the foundation for a reasonable structure to stand on. They scored 91 in the process before Rahane left for 41. Raina landed on the crease and the scoring caught speed as he got solid support from his captain after Rohit’s exit for 52. At the end of the innings India’s score board read 304 for six.
England’s innings got affected by rain leading to a revised target of 295 in 47 overs only to make the guest gain 1-0 lead in this Royal England series.