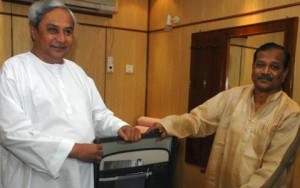 Finance Minister Pradip Amat on behalf of the Odisha government presented the state’s annual budget of Rs 84,487.77 Cr on Monday for the year 2015-16.It was Rs80, 129Cr in the previous financial year. With ongoing constraints in the mining activities in the state and the prevailing uncertainties on central transfer a circumspective government could only manage to plan a modest 5.42 percent increase in the budget size. The government will have to go for borrowing to meet the fiscal need.

The state government has estimated to receive Rs 70940.50Crin the revenue head while expenditure in this head has been planned at Rs65828.99Cr thereby making a surplus of Rs5101.01Cr. Though there is surplus in the revenue head the government will find short of Rs Rs10.400 in the fiscal head, a fiscal deficit of 2.99 percent. Government has planned to compensate the short fall through borrowing. Its net borrowing would be Rs9893.68Cr and Rs506.61Cr of surplus public account.
Total non-plan expenditure is estimated at Rs. 43,956.32 crore in 2015-16, while state’s annual plan outlay will be Rs. 44,150 crore.

Education, agriculture and infrastructure find more emphasis in the financial blueprint as the budget outlay for school and mass education has approached Rs 10000Cr.and there was a separate budget for the agriculture and its allied sector. Rs10903.62Cr will be spent in this field marking a substantial increase of 14.27percent than the last year’s outlay in this sector. The previous agriculture budget was of Rs9542.22Cr.Among others in the sector Rs520 has been earmarked for deep bore well, Rs128.30Cr for jalanidhi and Rs50 Cr for potato mission.
To mark the highest of all the departments’ government has planned to corner Rs9979.49Cr for the department of school and mass communication against the last years Rs9327.12Cr.

See also  Come October, all the three Major political parties in Odisha will be seen out on the road for their respective political show off.

Government will spend Rs 14,232.58Cr in the coming fiscal for infrastructure development against Rs 12,728.53 Cr in the 2014-15 fiscal. Mukhya Mantri Sadak Yojana will get Rs 250 cr while there was an allocatioin of Rs30 cr for Biju Expressway, a scheme aimed at upgrading road connectivity in western Odisha and Mao affected regions.

Odisha government’s pet programme one rupee a Kg rice scheme will get Rs1402.99 Cr while there is an allocation of Rs 100.60 cr for the laptop distribution programme in the budget. Rs 700 Cr has been earmarked for Biju Pakka Ghar yojana, a state government initiative to make 100 percent pakka residences in the state.