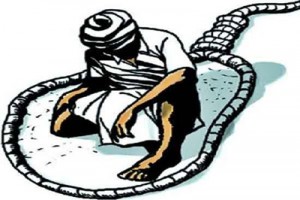 Another farmer in Odisha committed suicide on Friday just a day after Odisha Chief Naveen Pattnaik had addressed a mega farmers rally. He was Shobha Singh Majhi from Dangariguda in Nuapada district. One farmer in Sundargarh district also has hanged himself to death on the same day. Report of similar incident has also appeared from Dhenkanal.

To mark the unprecedented chain of incidents Odisha has been standing witness to a spate of farmers’ suicide during the last thirty days. The state government has admitted the number of farmers’ death to be 70.However unofficial sources count it above 90 till now. After some initial reluctance, government has started to acknowledge the reported deaths are of farmers but is still not ready to accept any agrarian distress there being the cause behind the suicides.

Yet it seems after a month that the government is not rejecting the farmer’s suicide outright even though some of its members are pouring in the ambience with remarks denying the allegations.
The fact on the alleged suicides will be established only after a proper enquiry, Naveen government has already bestowed the task on the district collectors however the opposition BJP demands a magistrate enquiry into the suicide cases in question. “Truth will not come out without a magistrate level enquiry.”BJP leader Bijay Mohapatra has been saying this through several media conferences.

Findings in the enquiry may or may not verify that all the alleged suicides have this year’s drought prompted distress at the root. But it can’t be ruled out that agriculture in Odisha is in a pathetic state. It is simply weak to support 67 percent of Odisha’s population for their livelihood. The agricultural set up does not have that infrastructural support for that. Odisha has irrigational infrastructure to support just one third of its agricultural land, sixty six percent of the land depend on rain water to carry crop. That is also in kharif season for rabi season the status looks further grim.

Banks and other financing institutions bear a hostile approach towards the farmers particularly the marginal and small farmers thus compelling them to surrender themselves before the unauthorized money lenders to be exploited.

The farming community in Odisha is ailing at the core; its life force is waning. The state government may demonstrate its two central awards for agriculture it has won in 2014 and in 2013 as testimonies of a healthy farming community in Odisha. The government may shower encouraging words for the farmers as they are braving the natural challenges every year but the farmers want the government recognize what really their disease is. But for the farmers’ dismay government is not doing that. It is yet to open to accept that there are suicides in the state due to crop failure.

This is a reason why cases of suicides among the farmers are not stopping. On the 5th of October CM Naveen Pattnaik announced a thousand- crore- Rupees package for the drought hit farmers but the very next day came reports of farmer suicide. Government gave a recess of one year to the farmers for loan repayment yet it could not stop suicides among the farmers. Naveen Pattnaik asked his ministers and legislators to stand by the farmers still the farmers continue killing themselves. The Chief Minister approached the farmers in a grand rally in Sohel in Bargarh on 19 Nov; there he announced a package of Rs 35000 Cr for the western Odisha of which 80 percent would go to agriculture; he reiterated agricultural loan to be provided at 1pc interest rate but the question is still remains to be there, are the farmers convinced? Because a day after the rally reports appeared that another three farmers in Odisha had killed themselves.

By not accepting that agricultural distress is prompting farmers’ suicides in the state Naveen government has become a target of opposition’s attack that it is ignoring the gravity of the situation thus hiding its failure and shrieking of its responsibility.