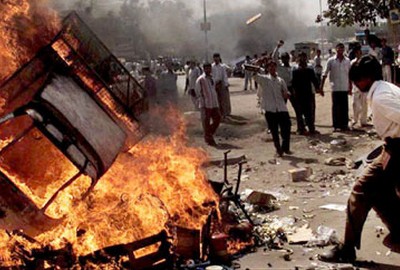 Naidu commission submitted its report on Kandhamal riot to the Odisha government on Tuesday.

Arun Kumar Pattnaik secretary of the commission handed over the report to the home secretary Asit Kumar Tripathy. The report comprising 1027 pages in two volumes has come after 7 years of investigation into the riot broke out in Kandhamal following the assassination of Swami Laxmanananda on 23 August 2008.

In total 825 affidavits had been received by the commission during the course of investigation, besides the commission had registered statements from 850 people.DGP Odisha, SP Kandhamal, political leaders, Secretaries of some departments, common men and NGOs had presented their statements.

On August 23, 2008 unidentified assailants had gunned down Swami Laxmanananda and four of his supporters in the Jalespeta Ashram. The news stirred the communal sentiments leading to violence in the district. Thirty eight people lost their life and many were injured in the viiolence.

On Sept.8, 2008 Odisha government set up a commission under Justice Sarat Ch. Patra to probe into the riot. Justice Patra died in 2012 and the charge of investigation went to one man commission A.S.Naidu.
The report will be produced in the assembly with cabinet approval. As of now contents of the report are all speculations.

Both Congress and BJP, the parties in opposition are not happy with government for the way it contributed in the process of investigation .They have questioned on the accuracy of the report.

Pratap Sarngi of BJP has questioned why the secretaries of departments like Home, Law, Revenue and Scheduled caste and Scheduled tribe were not allowed to give their witness before the commission.