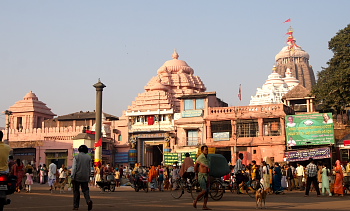 The four summoned Badagrahis, on Sunday have deposed their statement regarding the blunder in Brahma Parivartan rituals before the court of chief Administrator Suesh Mohapatra of Sri Jaganath Temple Administration (SJTA).

“Action will be taken after studying the statements” said the Chief administrator, “under 21(A) the Sri Jagannath Temple Act 1954”He also added that Vidyapati and Viswabasu of Banajaga yatra and the president and secretary of the Daitapati Nijoga are to appear before the court on 23 June to file their statement.
Following strong reactions from across the state and abroad on the mismanagement of the Brahma Parivartan event the SJTA had issued notices to nine servitors seeking their clarifications on the issue.

Unlike it was earlier the Badagrahis seemed to be a bit circumspective when they came across the media after the interrogation. It may be the impact of the decree issued lately by the temple administration to check the tongue of the outspeaking servitors.

Jagannath Swain Mohapatra who claims to have performed the brahma Parivartan ruled out their being presence of any fifth person in the prohibited Anasara Pinda however he admitted that there was brawl during the process that led to delay of the event. at the same time he observed that it as a trivial matter that a few useless persons are making a issue of which.