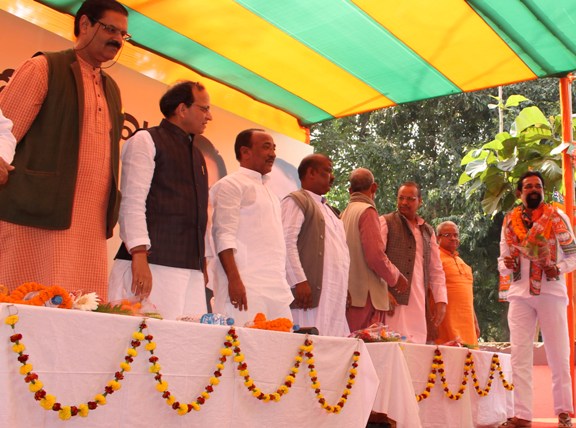 Hundreds of workers from BJD and Congress from have joined Bharatiya Janata party (BJP) here in Bhubaneswar today. Prominent among them are Bhagirathi Sethi, the former legislator from the ruling BJD and Satyabrata Mohapatra of Congress, who hails from the coastal district of Jagatsinghpur. Both the leaders among others were seen leading hundred of their supporters to the BJP fold in an ostentatious arrangement in the party headquarters.

Bhagirathi Sethi was the MLA of Anandpur before he was denied ticket by his party in the last elections. In his joining address Shri Sethi termed BJD as becoming a party of scamsters while he hailed Prime Minister Narendra Modi’s visionary leadership as his inspiration for joining the party.

The development has made the saffron party leaders dare claim stake on larger political space in the state.”BJP is the only organisation that will fill up the political vacuum being created at present in the state. “said senor political leader Bijay Mohapatra referring to the changed political scenario in the last 6 months since the general elections.

BJP Odisha in charge Arun Singh predicted that his party would form government in Odisha in 2019 as he asked the party workers to intensify the effort to get 30lac party membership. He claimed BJP’s membership in the country has touched 1 cr 23lac 84 thousand.