Mr Pradhan said, Atalji from an individual has become an absolute and immortal ideology to-day.

President of the Odisha BJP Basant Panda presided in the ritual that witnessed the participation of thousands of people paying tribute to their beloved leader. 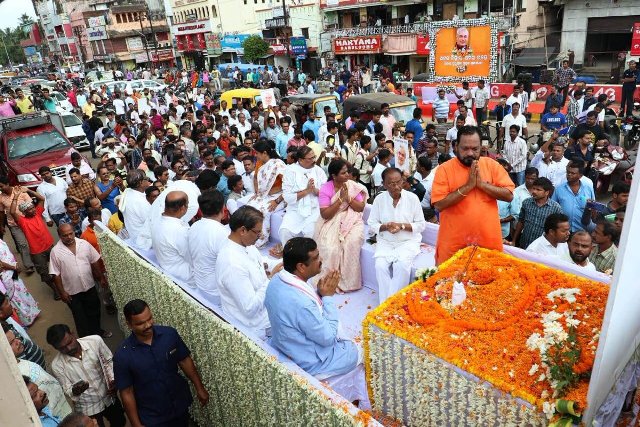 As scheduled,  a huge procession of BJP leaders and workers with the urn of ashes  set for Puri at about 10AM from the party headquarters in Bhubaneswar.  Union Minister Dharmendra Pradhan, Leader of the legislators in the Assembly K V Singhdeo, Former Chief Minister Giridhari Gamang and other senior leaders of the party were part of the procession.

Yesterday Basant Panda had arrived Bhubaneswar with the urn from Delhi as per BJP’s plan of an extensive “Asthi Kalash Yatra” and immersion of the ashes of the BJP stalwart Vajpayee in rivers in 29 states and 7 Union Territories.

Four holy rivers -Mahanadi, Brahmani, Baitarani and Rushikulya in Odisha have been identified for the immersion rituals.

BJP is organising an all people Shradhanjali Sabha commemoration assembly in Bhubaneswar tomorrow to pay homage to the founding fathe rof the party.Odisha CM Naveen Patnaik and leaders of other political parties have been invited to the occasion.

See also  Youth kills himself for not being able to pay bribe. “It is a state sponsored killing”: Dharmendra