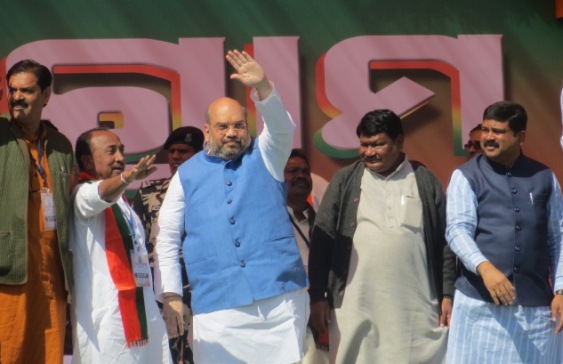 Amit Shah, the BJP president known for his aggressiveness, preferred to stay away from making any frontal attack on Naveen Pattnaik. However he has endorsed all the assaults launched from his pad on the Odisha Chief Minister by his state party colleagues.

“As far as any attack on Naveen Pattnaik is concerned, you will see that when the time will come” said Mr Shah in the press meet in Bhubaneswar in the concluding part of his two days trip in Odisha.

Odisha is one among the six focus states of BJP picked up for the party’s vitalization workup. Since BJP had the break up with BJD in 2009 the party has suffered series of electoral debacles in panchayat, assembly and parliament encounters. Its organizational strength was on a downward slide.

In spite of all the boosters from the center the state unit of the party has failed to pick up to a requisite speed in membership collection for meeting the target of 40 lacs by March. At present the party has garnered some 7.7 lacs members. In the last general election BJP though had registered a 6 percent growth in popular vote it still was far behind the BJD’s 44 per cent vote share. BJD won 117 assembly seats where as BJP could get only 10. So without the right organizational muscle the party chief did not feel it wise to take on the BJD bull by its horn. He preferred a development planked competition with BJD rather than a head on confrontation on the issues of corruption.

In his public address from the platform of “Mahasangram” on Jan.6 Amit Shah pronounced all the developmental schemes and achievements of Modi government on the fronts of politics , economy, defence and foreign affairs. He raised the issues of health, education, sanitation and employment in Odisha to attack Naveen Pattnaik but said little about the various corruption cases came up of late.
Mr Shah repeated the same before media the next day as a mark of reconfirmation of his stand in Odsha Politics. Even though Mr Shah said that his party workers in Odisha will carry on fighting against BJD on the planks of development and corruption and “they would lead it to the logical end” it seems that the president is yet to have confidence on the state unit for the war against its former ally.