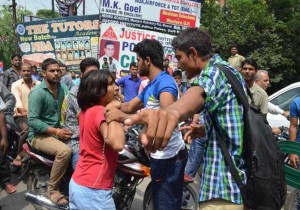 In a display of courage, a woman in Meerut took on a group of attackers single-handedly as they assaulted her husband after hitting the couple’s bike with their car in a busy street while no one came forward to help her.

The incident, which took place on Tuesday, came to light as photographs and video of the incident were aired following which one of the youths, who attacked the couple, was arrested by the police on Friday.

According to Superintendent of Police Om Prakash, the incident occurred at ‘kacheri pul’ area when a Santro car hit the bike of the woman and her husband.

According to the woman, the youths who were in the car alighted and started assaulting the woman’s husband following which she tried to resist the attackers by showering them with blows.

The woman said that she and her husband sought help from the people present at the scene but no one came forward.

The Samajwadi Party said they did not receive any complaint from the woman, but one of the accused, Ankit, a resident of village Bana in Mawana, has been arrested following a complaint from a home guard Babu Ram, who was an eyewitness.