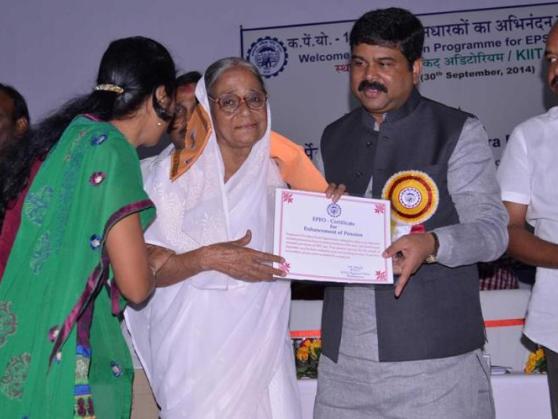 BHUBANESWAR:Union Minister of State for Petroleum and Natural gas Dharmendra Pradhan, here on Tuesday, launched the Rs 1K-minimum pension scheme that guarantees minimum Rs 1000 a month pension under a recently amended EPFO’s retirement scheme. Around 56 thousand pensioner in Odisha will receive a hiked pension from October1.

There are 12, 05, 92 pension holders in Odisha under EPFO while 56,878 have their pension under Rs1000.they would be benefited in the scheme, said Minister Pradhan.As he added that there are many who are to subsist with a pension even less than Rs 500 a month. His government is concerned about this state.

He said, “Employees’ interest is very dear to the government” as he added to attest it that wage ceiling of the social security schemes of EPFO has been increased from Rs 6500to Rs15, 000 .Employees’ Deposit Linked Insurance will now be of maximumRs 3,60,000 a nearly threefold hike from the earlier Rs1,30,000 .
The government last month had notified an amendment to Employees’ Pension Scheme-1995(EPS-95) to guarantee minimum Rs 1000 as pension per month and the scheme was formally launched on Tuesday in 37 centers of EPFO.

See also  Suspected foreigners who fled from Odisha are not found to have terror connections.