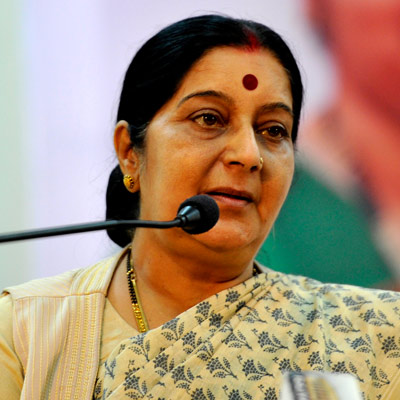 External Affairs Minister Sushma Swaraj said that she had never helped Lalit Modi and challenged her abettors to produce evidence if they had any to substantiate the charges against her. She however said that she had helped an ailing wife as she pointed that she could not have been “left to die”. “I want to ask what Sonia Gandhi would have done had she been in my case” said the Union Minster “This is humanitarianism”

Sushma Swraj, under belligerent attack from the opposition on charges of helping Lalit Modi a fugitive made here statement in the lok sabha on Thursday. In an emotion filled statement she said “His (Lalit Modi’s) wife has been suffering from cancer for the last 17 years and it is the 10th time it has recurred… I want to ask what Sonia Gandhi would have done had she been in my place. Would she have left her to die?”

She said she only told the British government that relations with that country would not be affected if they choose to provide travel document to Lalit Modi to visit Portugal to be with his ailing wife for her treatment.

“I challenge those making accusations against me to produce even one document, one chit or an e-mail to back their allegations.” said Sushma in the lower house with a virtually empty opposition bench. Congress along with major parties in the opposition has boycotted the lok sabha protesting the ruling of suspension of 25 congress lawmakers by the speaker.

Congress is too reluctant to buy the” humanitarian” point in Sushma’s statement of defence. The party terms it as “hogwash, difficult to accept”