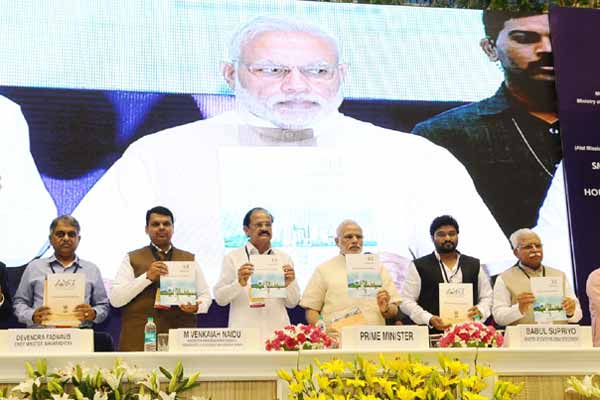 Prime Minister Shri Narendra Modi today launched three mega urban schemes viz., Smart Cities Mission, Atal Mission for Rejuvenation and Urban Transformation (AMRUT) and Housing for All in urban area setting in motion the process of urban transformation to enable better living and drive economic growth. Stressing on the need for people centric urban planning and development, he said that for the first time in the county such an effort has been launched.

Defining Smart City as one which is one or two steps ahead of the aspirations of the people, Prime Minster said smart city aspirants are being selected through a process of competition and with effective citizen participation ending the ‘top down’ approach and leading to ‘people centric’ urban development. He further said that the new schemes were formulated after extensive consultations with all the stakeholders, the biggest of its kind in the country so far. Shri Modi noted that the management of urbanization in the country offered the biggest challenge and opportunity for the people and elected municipal leadership to contribute to transforming urban India.

Stating that public representatives are remembered for the good work they did during their tenures, the Prime Minister urged Mayors and Municipal Chairpersons attending the launch to contribute for the good of the people. He reminded them that the 500 of them assembled have the responsibility of ensuring better quality of life for 40% of the country’s population that either live in urban areas or dependent on them for livelihood. He urged them to help migrants to urban areas meet their aspirations.

See also  Rahul’s coronation programme is out. He will have the Congress’ rein in December first week.

Stating that urbanization should be viewed as an opportunity, Prime Minster noted that had this been recognized about 30 years ago, situation would have been far better today. He said that with clear vision and effective planning, all possible hurdles could be overcome and even resource mobilization would not be an issue.

The Prime Minister observed that a house would be a major turning point in the lives of the poor as it would motivate them towards higher goals like earning and saving more for further bettering their living standards. He said that the Government is committed to enable 2 cr urban poor own their houses by the year 2022, the 75 year of Independence of the Country.

Speaking on the occasion, Minister of Urban Development and Housing and Urban Poverty Alleviation Shri M.Venkaiah Naidu said that the Government was keen to promote inclusive development and the new schemes are pro-poor in their orientation. Elaborating on this Shri Naidu said that Smart Cities, AMRUT and Housing Mission would help the urban poor through increased access to water supply, sewer connections, public transportation, housing, improved urban governance ensuring transparency and accountability and better delivery of services, enhanced employment opportunities etc.

Shri Venkaiah Naidu noted that the new urban schemes have been so designed and formulated so as to completely do away with any subjectivity or discretion in selection of cities and in allocation of funds and States are being given full liberty and flexibility in formulation, appraisal and approval of projects. He said that urban reforms, smart leadership and smart people are key to the success of new missions.

In his welcome address, Minister of State for Urban Development and HUPA Shri Babul Supriyo said that the triad of Centre, States and Urban Local Bodies are like the upper, middle and lower berths of a railway compartment, together moving on the same track of development of the country.

Chief Ministers of Maharashtra and Haryana, Deputy Chief Minister of J&K, Ministers from 20 other States, Mayors, Municipal Chairpersons and Commissioners from 500 cities and towns, senior officials from Central and State governments, diplomats from 15 countries, representatives of stakeholder organisations and multilateral bodies have attended the launch.

Discussions over implementations issues relating to the three new missions and Swachh Bharat Mission would continue over the next two days.