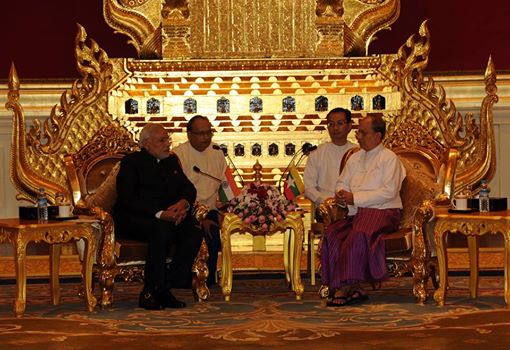 Prime Minister Narendra Modi made the start of his schedules on Tuesday with a bilateral meeting with Myanmar President U Thein Sein soon after his arrival at Nay Pyi Taw. The 45 minutes meeting between the two heads of the state held in the presidential palace was focused on subjects in the areas of trade and culture.

Both the leaders agreed upon the importance on connectivity as means to boost trade and man -to -man relations between the two neighbours. Shri Modi reviewed some of the ongoing connectivity projects those include the 3200 Km highway project that would link India, Myanmar and Thailand and the Kaldan transport project. They Imphal- Mandalay bus service was also figured the meeting to which Shri Modi has described as “a good meeting with President Thein Sein.” In his twitter blog.

Prime Minister Narendra Modi on Tuesday has arrived Myanmar Capital Nay Pyi Taw to take part in the 12th ASEAN-India Summit meeting and the subsequent East Asia Summit in the next two days on the first stop of his 11 days three nation trip. The Prime Minister from there will fly to Australia for the Brisbane Summit of the G-20 nations where he has schedules to meet 40 leaders from the states from Asia-Pacific, Africa, South and North- America including the a bilateral talk with his Australian counterpart Tonny Abott before he would be to FIJI.

The ASEAN (Association of South East Asian Nations) comprising Brunei, Cambodia, Indonesia, Laos, Malaysia, Myanmar, the Philippines, Singapore, Thailand and Vietnam is the third fastest growing economic region having a combined population of 60 Crore be the third largest population. The dynamism of the region attracts Shri Modi to be seen as the “core” of India’s vision for East Asia.

Prior to the trip PM Narendra Modi in his departure statement, has expressed, “This (ASEAN) dynamic region is our continental and maritime neighbor, linked by centuries-old ties. ASEAN is at the core of our Act East Policy and at the centre of our dream of an Asian century, characterized by cooperation and integration”