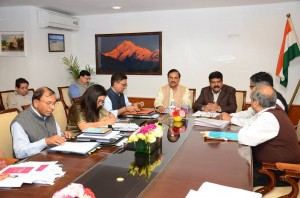 When the vast tourism potential of Odisha has become a subject to be tapped, government of India traces the X factor in the Nabakalebar Rath yatra in July this year in Odisha. Branding and promotion of Nabkalebar, this year will be done as an “event of international tourism.” The central Ministry of tourism in coordination with the Ministry of Petroleum and Natural gas is set to take several measures in this direction.

“All the stakeholders including Odisha State Tourism, Tourist guides, hospitality industry people, travel industry and the Culture & Tourism Ministry of the Government of India will make consolidated efforts to promote this even an international tourism event.” said Dharmendra Pradhan, union Petroleum Minister after he held a review meeting with union tourism Minister Dr Mahesh Sharma.

It was decided in the meeting that the Ministry of Culture will bring out Coffee Table Book and also make special documentary on the Rath Yatra. Coins and stamps will also be issued to commemorate the yatra.

Sri Pradhan who hails from Odisha informed that Tourism Ministry has already sanctioned Rs. 50 crore and Central Government will also supplement budgetary support as per the requirements of the event. Lakhs of people would be visiting the Nabakalebar Rath Yatra and Government is committed to making glitch free arrangements for the event.

Tourism Minister Dr. Mahesh Sharma informed that his Ministry was making efforts to utilise the 450-km long coastal belt for promoting tourism in Odisha. He informed that discussions revolved around making suitable arrangements to make this a memorable event.

Both Petroleum Minister Mr. Pradhan and Tourism Minister Dr. Sharma shall undertake a two-day visit to Odisha on 20th and 21st March to review the preparations for the Nabakalebar Rath Yatra.