Prime Minister Narendra Modi, on Thursday, launched the Prime Minister Jan Dhan Yojana (PMJDY), a banking connectivity Programme aimed to establish financial liberty in the country. 40 percent of India’s population that is not linked with the country’s huge banking system must be made free from this “financial untouchability” says the PM while unveiling the mission document.
Describing opening up of a bank account as a step towards joining the economic mainstream the PM said that a bank account will help its holder release from the vicious circle of poverty. “We have to connect every person with the financial system” said Modi adding “The banking system in the country has a big responsibility for realizing this”. He expressed his unhappiness for the fact that in the 68 years of India’s independence not 68 percent people are connected with the Banks. He called up the banks to brace up for meeting the 75million account target by the 26th January 2015 under the scheme. On the opening day the there were 15 million accounts opened to mark a highly promising beginning of the mission. 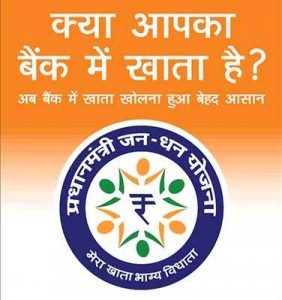 PMJDY, the brain child of Narendra Modi saw the light on Thursday in a grand way. A record 15 million accounts were opened on that single day in 600 camps and 77000 programmes across the country to which Narendra Modi describes as a festival, “festival of financial freedom”. “Every account” he said “will be connected with RuPay debit card” that will ensure an accidental insurance of 1Lac.the account holder will experience a financial liberty as he is free to overdraw up to Rs 5000.besides the debit card will enhance its holder’s self-esteem that shows the rich-poor divide reduced remarked Modi in his launching address.

See also  Again no hearing on Ayodhya case on 29 Jan, fixed for the bench to sit.