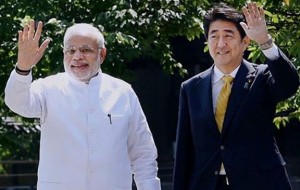 India and Japan agreed to boost the bilateral relationship in defense and economic concerns as the 21st century, they feel, will depend on the strength and progressiveness of the ties between the two countries. In the coming years, there will be a twofold Japanese investment in India, a good defense trade and cultural exchange.
The summit meeting, between Indian Prime minister Narendra Modi and his Japanese counterpart Shinze Abe in Tokyo on Monday had figured subjects on political, economic, security, and cultural exchange. As both the leaders resolved to “work hand-in-hand to dramatically strengthen relations in every field and elevate ties to a special, strategic global partnership,”
Japan will invest $35billion in India in 5 -year period under India –Japan Investment Promotion Partnership that will be used in infrastructure, connectivity, smart city projects, rejuvenation of Ganga and other rivers, manuracturing and clean energy. Japan also agreed to offer financial, technological and operational help to India’s bullet train project.
In the defense front, Japan “agreed to pursue security and defense operations in India including maritime security.” said Shinze Abe. Talks will be accelerated on the possible sale of an amphibious aircraft to India by Japan as both the parties agreed strengthen the dialogue process in this regard. However the much talked about civil nuclear pact failed to be materialized but the Japanese Prime minister assured that he and Modi had asked their officials to accelerate the process of the nuclear agreement.
Narendra Modi said “We intend to give a new thrust and direction to our defence cooperation, including collaboration in defence technology and equipment, given our shared interest in peace and stability and maritime security,”
On the third day of Japan trip Narendra Modi began the day with a visit to the 136 years-old Taimei Elementary and addressed a luncheon meeting of business leaders.