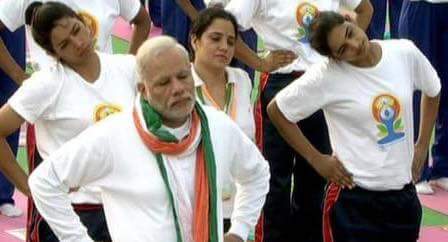 Some thirty five thousand persons rolled out their mats on the Delhi Rajpath at 7 o’clock in the morning of 21st June to pursue yogic exercises for the next 35 minutes to mark the observance of the first Internal Yoga Day. The Prime minister of India Narendra Modi the Initiator of the occasion was counted one among the presents. Modi a yoga enthusiast performed all the 35 postures with the others during the demonstration.

Besides in Rajpath yoga demonstrations were held all across the country. Schools, organizations both private and government and even states organized the yoga events registering an unexpected success of the occasion. In the NDA ruled states including Jammu and Kashmir, their governments played active role in organizing the event. However in Odisha and West Bengal the event received support from the BJD and TMC government respectively. Delhi Chief Minister Arvind Kejriwal was there at Rajpath with his Ministers practicing the descipline.

Raman Singh the Chief Minister of Chattisgarh , Shivraj Sing chouhan the Chief Minister of MP were seen doing all those stretching and twisting to observe the day. Union ministers too spread the yoga mats in public demonstrations in different part of the country. Health Minister JP Nadda took part in a yoga event in Hyderabad. Law Minister Ravishankar Prasad did yoga in Kolkata. Manohar Parikar, the defence Minister moved to UP for the occasion, Smriti Irani was seen observing the occasion in Shimla while PNG Minister Dharmendra Pradhan joined in a cuttack show of yoga.

In Odisha thousands of yoga enthusiasts braved the morning drizzle to make the event success. There is report that army personnel did yoga exercises at very high altitudes.
“As I stand here today the International Day of Yoga is being celebrated across the world.” said the Indian Premier in speech that followed the 35 minutes of show. “Millions of people around the world are participating in this event. From sunrise in the Far East to sunset in the furthest corner of the western hemisphere, people will join in this great celebration of yoga today.”