The case fatality rate of Covid-19 in India came down to below 2 percent for the first time since the virus outbreak. It is 1.99 percent now, as the official update showed. Though, 871 people died of the infection in the last twenty-four hours. 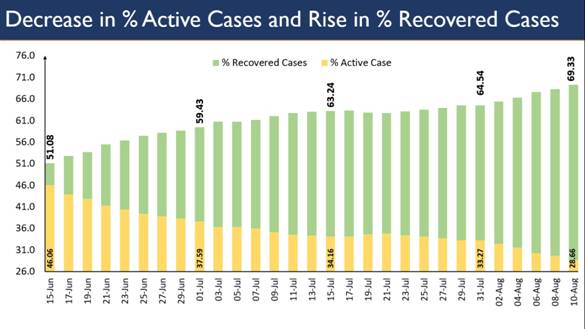 India saw 887 deaths in the 24 hours ending Tuesday, 8.30 AM. However, the number is 126 less than it was in the previous 24 hours. Maharashtra, alone, had 293 Covid-19 deaths during this period, one-third of the total. Tamil Nadu and Karnataka stood second with 114 deaths each. Andhra Pradesh, the other south Indian state, with 80 deaths comes next. The top six states bear 73 percent of the overall Covid-19 deaths across India. Uttar Pradesh and West Bengal also record high mortality in the infection.

India hopes to bring the case fatality rate down to 1percent soon. Efficient and improved clinical treatment along with the proper strategy of tracing, testing, and treatment has helped India achieving success in containing the fatality rate.

India’s recovery rate has improved to nearly 70 percent. As of today, 1583499 have been cured of the infection, taking it to 69.33 of the total cases. About 4.9 lakh have recovered in the last ten days.

See also  Address by the President of India, Shri Pranab Mukherjee to the Joint Session of both houses of Parliament