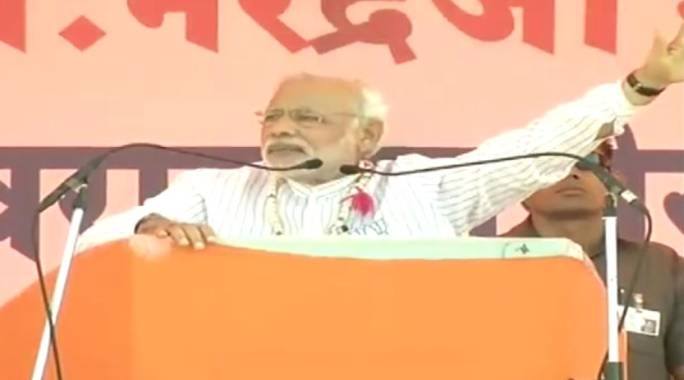 Bharatiya Janate Party (BJP) emerged winner on Sunday in the poll battle for two states as a mark of reconfirming Modi wave in the country. With wins of 47 assembly segments of the total 90 in Haryana BJP got enough public mandate to take reign of the state. In Maharastra Modi wave snatched 122 seats out of 288 for its party by drubbing all the contestants in the fray.

The pre-poll environment in Maharashtra witnessed a disintegration of the two Major alliances in the state to make the state assembly elections a pentagonal affair. A day after the Congress- NCP tie of 15 years collapsed the 25 years old Shiv sena –BJP alliance succumbed to mutual clash for seat. So it became a fight among BJP, Shiv sena, Congress, NCP and NMS. There were other small [arties too but these five were the main players in the fray to reckon.

In a five corner fight in Maharashtra BJP bagged 122 seats to register a phenomenal increase in the seat from the 46 seats in the previous assembly elections. Shiv-Sena finished at a distance second with 61 seats. Congress slumped to all time low with 42 seats only 1 seat more than it’s just drifted ally NCP. Raj Thakrey’s MNS got a single.

However in the 288 seat Maharashtra assembly BJP is 23 short of a comfortable majority to form government on its own, thus creating a condition for some post poll affairs for government formation.NCP, just after the election result was out, has offered unconditional support to BJP. With this move of NCP the bargaining value of Shiv Sena in the upcoming government formation deal seems to have been affected. But the door for Sena- BJP re-alliance is yet not closed. BJP‘s senior most leader L.K Advani has adviced for a BJP-Sena government in Maharashtra.
BJP though said to be in a strong position the tough fact is that it does have only two practical options to go with for the government formation. It is either Shiv-Sena or NCP. All the situations combined promises an interesting political show is in waiting to come.

In Haryana BJP romped home comfortably. It won 47 seats thus became capable to form government on its own. INLD stood second with 19 seats and Congress finished third. It won 15 seats. BJP is riding to power from a minor partner having 4 seats from the previous election