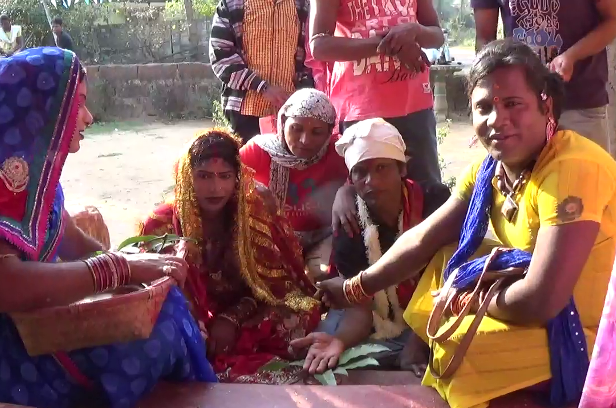 Sumati on the 13th of January took the nuptial vow with Dharani before the deity in presence of hundreds of their friends and well wishers.

From the exterior it was well a marriage, a marriage bearing all the rituals under Hindu tradition. There was color, emotions and vows as qualifications for a marriage. Yet it was the first of its type in Angul, in the state of Odisha. Somati the bride belongs to the clan of Kinner , the neuter so is Dharani, the groom. Hundreds of their clan participated in the ceremony. They gave their all to the ceremony to make it life time memory. They jerked their hips and chest to the fullest, had a community feast, wailed at the departure of the bride, notwithstanding the status of the marriage.

But they are hopeful that their marriage will get legal sanction and social recognition. Though, the truth for them is at the harsher side. The law of India does not approve a gay marriage, marriage between same sexes. It comes in the category of criminal act. As far as the social recognition is concerned the Kinners are the most discriminated lot, isolated from the mainstream society. The same sex marriage can’t find a place in the religious ambit either.

This may be the condition at present but they are optimistic. They see light in the changing world. Yet “we are least worried about all these social and legal dimensions of the event.” said jabbar. But the fact is that they have staked their claim for an inborn right to live. Their right to have their social, emotional and biological needs met through relationship.

umati and Dharani have put their relationship into the institution of marriage so that it will get a name. They will have a family with commitments for each other in the societal set up to have the securities ensured. A societal cover will protect their clan from being prone to sexual exploitation. They will find a place in the social mainstream.
This is a beginning in Angul, though there are struggles going on worldwide to restore human dignity in this ilk.